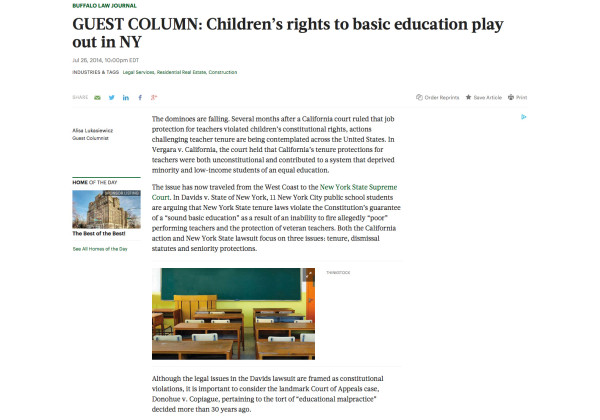 The dominoes are falling. Several months after a California court ruled that job protection for teachers violated children’s constitutional rights, actions challenging teacher tenure are being contemplated across the United States. In Vergara v. California, the court held that California’s tenure protections for teachers were both unconstitutional and contributed to a system that deprived minority and low-income students of an equal education.

The issue has now traveled from the West Coast to the New York State Supreme Court. In Davids v. State of New York, 11 New York City public school students are arguing that New York State tenure laws violate the Constitution’s guarantee of a “sound basic education” as a result of an inability to fire allegedly “poor” performing teachers and the protection of veteran teachers. Both the California action and New York State lawsuit focus on three issues: tenure, dismissal statutes and seniority protections.

In the Donohue case, an 18-year-old former student and his parents filed a failure-to-educate claim against his public school system claiming, in part, that he should have been provided appropriate personnel and facilities to respond to his needs. Ultimately, the court ruled in favor of the school system and denied the plaintiff’s recovery on public policy grounds.

In the first Campaign for Fiscal Equity action, the plaintiffs sought a declaratory judgment against New York State claiming that the students in New York City public schools were not receiving a basic education and that the state’s public school financing system was unconstitutional.

Although the plaintiffs’ action ultimately survived a motion to dismiss, the court advised the plaintiffs that they would “have to establish a causal link between the present funding system and any proven failure to provide a sound basic education to New York City school children.”

During the course of a 1999-2000 trial, the court determined that the trial record ultimately supported the conclusions that the children in New York City were not receiving the constitutionally mandated opportunity for a sound basic education. The court determined that New York City public schools provided inadequate teaching because they were unable to attract and retain qualified teachers. The court then directed the state to reform the current system of financing school funding and managing schools.

What followed was a series of both executive and legislative actions as well as the subsequent compliance lawsuits that are known as Campaign for Fiscal Equity II and III. In Campaign for Fiscal Equity III (CFE III), the court acknowledged that complex societal and governmental issues were a subject best left to the discretion of the political branches of government. The court stated that they have neither the authority nor the ability and the will to micromanage education financing.

However, at the same time, the court acknowledged it is the province of the judicial branch to define and safeguard rights provided by the New York State Constitution, and ordered redress for violation of them.

Although more lawsuits may follow the Vergara ruling, the New York courts will inevitably consider if the primary decision making on teacher tenure rests with the legislative branch.