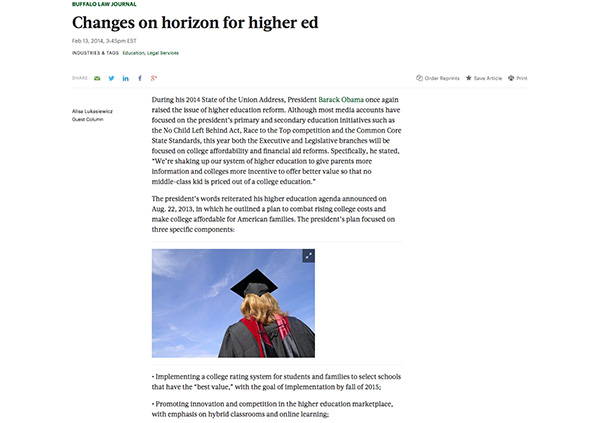 During his 2014 State of the Union Address, President Barack Obama once again raised the issue of higher education reform. Although most media accounts have focused on the president’s primary and secondary education initiatives such as the No Child Left Behind Act, Race to the Top competition and the Common Core State Standards, this year both the Executive and Legislative branches will be focused on college affordability and financial aid reforms.

Specifically, he stated, “We’re shaking up our system of higher education to give parents more information and colleges more incentive to offer better value so that no middle-class kid is priced out of a college education.”

The president’s words reiterated his higher education agenda announced on Aug. 22, 2013, in which he outlined a plan to combat rising college costs and make college affordable for American families. The president’s plan focused on three specific components:

With respect to a new rating system for colleges, the initiative has been met with initial skepticism from most higher learning institutions. The president has indicated his plan to use these rankings to determine each school’s financial aid funding at both the state and federal levels. The ratings will be based on measures such as the percentage of students receiving Pell grants, scholarships, average tuition and outcomes such as graduation and transfer rates. In fact, in the upcoming reauthorization of the Higher Education Act (Pub. L. No. 89-329), the president intends to seek legislation allocating financial aid based upon these proposed college ratings.

He has proposed that the Department of Education will develop the new rating system to aid in determining the value offered by colleges by comparing colleges with similar missions and quantifying performance on a published college scorecard prior to the 2015 school year. Furthermore, he is proposing legislation to give colleges a bonus based upon the number of Pell students they graduate to encourage enrollment and graduation of low- and moderate-income students.

One aspect of the president’s initiative to promote innovation and competition is to propose regulatory waivers for “experimental sites” that promote high-quality, low-cost innovations in higher education. The Department of Education is also supporting efforts to remove state regulatory barriers for distance education. The specific innovative practices that the president is encouraging include, but are not limited to, promoting dual enrollment, developing more online learning communities and e-advising tools that integrate online platforms such as MOOCS, and recognizing prior learning. Furthermore, he has emphasized community college educations and is proposing a grant through the Department of Labor to be used to promote accelerated degrees and a partnership with industry for job creation.

The president’s student debt initiative focuses on expanding the eligibility for the Pay as You Earn Program, which allows some low-income graduates to cap their student debt repayment at 10 percent of their discretionary monthly income and forgiveness of any remaining debt after 20 years. The current program is available only to borrowers who secured loans after 2011. Starting this year during the tax filing period, the Department of Education and the Department of Treasury will be working to help borrowers learn more and enroll in the Pay as You Earn and Income Based Repayment plans.

It is anticipated that during the reauthorization, lawmakers will focus on changing the nation’s accreditation system and will update the Pell program. During the course of the next year, the House and Senate will be holding committee meetings and hosting a number of public hearings about the reauthorization. The Senate Education Subcommittee on Health Education, Labor and Pensions has already been holding hearings since September on the reauthorization. The Negotiated Rule Making Committee meetings focusing on program integrity and improvement are scheduled to begin Feb. 19-21, 2014.

With the anticipated goal of a new college rating system by 2015, the discourse over the next year during the course of the Reauthorization Act hearings will be of great interest to administrators, educators and students in higher education. Although the changes may not be as sweeping and expansive as outlined by the president, at the end of this year there will definitely be changes that impact colleges and universities