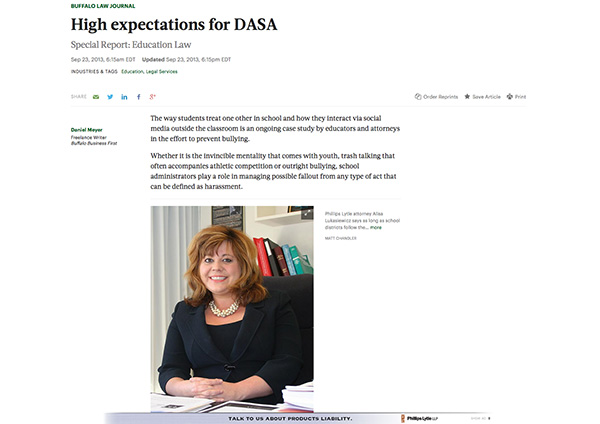 The way students treat one other in school and how they interact via social media outside the classroom is an ongoing case study by educators and attorneys in the effort to prevent bullying.

Whether it is the invincible mentality that comes with youth, trash talking that often accompanies athletic competition or outright bullying, school administrators play a role in managing possible fallout from any type of act that can be defined as harassment.

New York State’s Dignity for All Students Act, with anti-bullying guidelines that all public schools must follow, recently expanded to include cyberbullying. It’s a complex and fast-changing issue that schools are desperately trying to wrap their arms around, but one that some legal analysts feel is a necessary step to help keep children and school campuses safe.

DASA, signed into law in 2010, was amended in July to add cyberbullying via any form of electronic communication as a form of harassment covered under the law. The amendment also covers any online threat, intimidation or abuse that “occurs off school property that creates or would forseeably create a risk of substantial disruption within the school environment.”

The law requires all school employees who witness or hear of anything they identify as bullying, harassment or discrimination to report it to an administrator or designated staff member. The school then must take immediate action to document the incident and do what is needed to end the activity and eliminate the hostile environment — actions which could include contacting law enforcement if it is believed criminal conduct may have been committed.

So is DASA curbing bullying in school, as well as online attacks that some students launch after the end-of-the-day bell rings? According to local educators and attorneys, bullies are being identified and appropriately disciplined, but much work still needs to be done, especially in today’s ever-changing world of technological advancements.

“From my perspective, it has been a good law,” said Andrew Freedman, partner in Hodgson Russ LLP. “Anytime you can address bullying and what can be done to potentially reduce it, that’s a good thing. From what I have been able to observe, most school districts in this area have done a fantastic job of embracing it and overall instances of student discipline specifically linked to bullying (are) down.”

One local school that has embraced DASA is South Buffalo Charter School.

“I think it is a step in the right direction,” said Carrie Dzierba, head of school. “I think what the Dignity Act does for many schools is help to clearly identify things and bring them out in the open. The legislation has helped to reinforce and support efforts that some schools were already making in openly addressing bullying and harassment.”

Creating incident files with thorough documentation that supports DASA language is something Dzierba is most pleased with.

“We now have in place stronger and more detailed documentation that accurately records any instance of bullying,” she said. “The Dignity Act can actually help protect schools and address problems almost immediately after they are identified so we can work with the student who is being bullied, the student or students who are doing the bullying and effectively communicate with the parents of each student.”

Research evaluating the impact of DASA continues to be done at the University at Buffalo’s Jean M. Alberti Center for the Prevention of Bullying Abuse and School Violence.

“We received our latest survey responses from educators, and about 60 percent of our respondents reported to us that they feel things have changed somewhat since (DASA) took effect,” said Amanda Nickerson, center director. “In addition, a full one-third of the respondents said they didn’t think things changed at all. We will continue to look at all of that information and continue our research to analyze the differences and how the Dignity Act may be impacting the schools.”

While Nickerson does believe the law’s language addresses the desire to curb instances of bullying, she questions its impact.

“For those who are focused in on the implementation of true reform that is completely comprehensive, there will likely need to be some patience as it usually takes approximately three to five years to see the impact and significant change,” she said. “The intent of the Dignity Act is apparent and obvious, but I don’t know if legislation of any type can cause a cultural shift in any one school district.”
Ongoing public discussion and analysis of the problem is taking place across Western New York as school administrators continue to search for ways to reduce bullying in and out of the classroom.

“I think the Dignity Act is working OK,” said Mark Mondanaro, superintendent of the Ken-Ton School District. “We are aware and understand that the bullying issue is like a huge jellyfish where, when you chop a piece off and think a problem has been addressed, something else grows and emerges that you were not aware of before. It is ever-changing and a constant learning process for everyone involved.”

He hopes a specific focus in his district on dealing with cyberbullying will help educate stakeholders on the complicated and perplexing use of the Internet by some students to attack others.

“The weapons of bullying are constantly evolving and changing,” Mondanaro said. “As the technology advances, we are amazed by it but, at the same time, become frustrated when it serves as a tool to harass someone.”

While some legal challenges from students who have been punished for cyberbullying have been pursued, some attorneys say DASA and the amendment made earlier this year are no different than any other rules, policies and procedures that schools already have on the books and routinely enforce.

“It is reassuring to see school district administrators, building principals and teachers in the classroom following the protocol that is in place,” said Alisa Lukasiewicz, an attorney for Phillips Lytle LLP and co-leader of the law firm’s Education Practice Team. “As long as they are following that protocol, they should not have any specific concerns in terms of student speech and freedom of speech and any type of First Amendment challenges.”

DASA mandates that schools develop curriculum to support a school environment free of discrimination and harassment and provide training for employees to detect and prevent potential discriminatory and bullying acts. With cyberbullying, the actions often take place off-campus, but the aftermath often creates fallout at school.

“It is difficult at times because this focus raises attention to bullying but advancements in technology have changed the face of what bullying is,” said Dzierba of South Buffalo Charter School. “If something occurs during the schoolday and it interrupts what is happening in the classroom, we have some ownership of that and have to act appropriately.”

So how can a school district be expected to monitor off-campus activities of each student and later hand down disciplinary action for something that occurred in cyberspace?

“Bullying is a serious issue and everyone wants to see it prevented, but it is rather tough and unrealistic to monitor everything that is out there online,” Freedman said. “We need to do more to cut down on instances of cyberbullying, but at the end of the day we may be placing entirely too much emphasis on the school and their administrators, when a closer look at what happens in the home of each individual student might be the more appropriate action.”